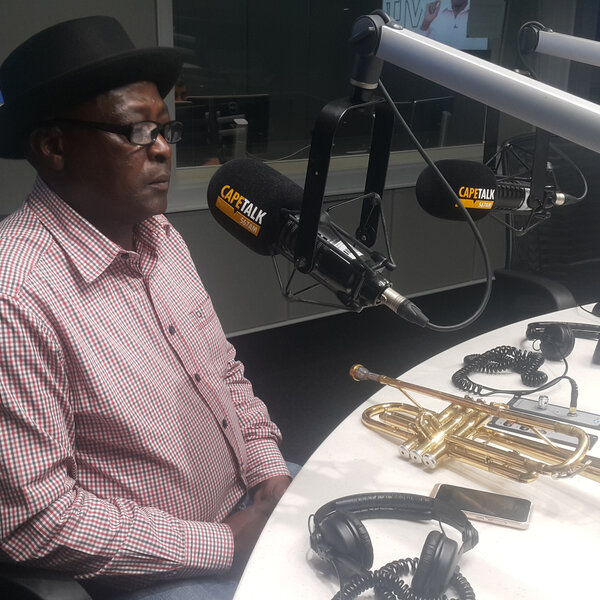 Guest : Blackey Tempi Township trumpet titan Blackey Tempi and his quintet combine big sounds, swinging township melodies, with sophisticated soulful harmonic vocals and a celebratory African rhythmic tempo. He has been shaping South African jazz since the 70’s. Known for his stylish blend of rhythmic African music an American traditions and his brilliant big band presence, he has recorded with the likes of Winston Mankunku and Errol Dyers. He started playing trumpet and frugal horn in 1977 after dropping out of school after the Soweto riots of 1976. He is largely self-taught although he joined Jazz Workshop in 1979 to study further. In 1982, he started his first band ‘Fever’ which played mainly cover music of the day and played regularly in the Cape Town nightspots. Between 1982 and 1985, he played with numerous bands in and around Cape Town and in 1985 toured Namibia for three months with the musical “African Follies”. On his return, he moved to Gauteng to play with a wide variety of bands. In 1998, he returned to Cape Town to participate in a three year jazz programme under Professor Mike Campbell but regrettably had to leave the programme due to financial constraints. During this time, Blackey had been playing with an 8 piece big band called “Tandanani” playing original African music, but he felt that a more commercial band was needed to appeal to a broader band of customers and in 2000 “The Brotherhood” was born. Between 2002 and 2012, Blackey toured extensively with hit tribute show “Diamonds and Dust “ and a further two years with other Barnyard tribute shows before returning home to start a successful B & B with his wife which is a hit on the Coffee Beans Route whilst performing at corporate events and festivals. Blackey Tempi quintet comprises: Blackey Tempi on trumpet, Anathi Mobo on vocals, Clayton Pretorius on bass, George Werner on keys and Thulani Mkhatshana on drums.

CoCT suspends metro cops involved in eviction of naked man - when do we question the actions of metro police officers? When will they be disciplined?

Guest : Rafieq Mammon | Artscape has partnered with community, regional and national radio stations across the country to bring the 2020 New Voices Programme to individual South African households as radio dramas over a two-month period from June to August.  The project seeks to give an opportunity to young writers as well as restoring dignity and confidence to those who have been disregarded and under-represented in the past.

Where in the world is... Lester Kiewit?

Only Grade 6, 11 and Grade R will return to school on Monday - WCED responds

Guest : Kerry Mauchline | Spokesperson for Education MEC Debbie Schäfer| The Council of Education Ministers has made amendments to some grades returning to school.   Minister of the Department of Basic Education Angie Motshekga held a meeting with stakeholders on Thursday and announced that  "After careful consideration of all the reports CEM took a decision that only Grade 6, Grade 11 and Grade R will return to school on Monday, 06th July 2020," the council said in a statement.  Other grades will be phased during the month of July.

Guest : Ashley Newell Food Flow is a new initiative pioneered during this crisis in Cape Town – with donations they buy produce from small-scale farmers who would usually supply the restaurant business – to make up essential vegetable boxes to distribute to communities facing food insecurity.   Thus, protecting the supply chain for the future, keeping small farmers afloat – Food Flow shifts the flow of produce coming from farms to those most vulnerable.      FoodFlow then matches the farmer with a community organization in their vicinity who distributes harvest bags or cooks a meal for their beneficiaries. FoodFlow works to sustain food livelihoods, enabling farmers to continue sustaining their business despite the loss of restaurant, hotel and market clients and ensures fresh nutritious food keeps flowing to those who are most impacted by food insecurity

Guest : Lawrence Manaka                Liyema Saliwa Today,  Equal Education held an online Children’s Conference, bringing together learner members of Equal Education (Equalisers) and education officials from various provinces, to discuss how to address the challenges faced by learners during the Covid-19 pandemic, and the realisation of a Charter for the Equal Education organization.

Guest : Chantal  Bredenkamp | Grade 3 teacher  at Sunnyside Primary School The last few months have been tough on the education sector.  Schools were one of the first institutions to shut down even before the nationwide lockdown was announced and soon all classes turned digital.  As the economic repercussions of lockdown led to job losses and pay cuts, many parents found themselves battling to pay school fees.  The effects have been dire. But one school refuses to go down without a fight.

Guest : Dr Pieter Kotze | Head at Geomagnetism Group At Hermanus The launch of NASA’s next Mars rover mission has been delayed to no earlier than July 30 because of a launch vehicle processing issue, the latest in a series of slips that have now used up nearly half of the available launch opportunities for the mission.   NASA announced June 30 that the mission, previously scheduled to launch July 22, would be delayed to investigate “off-nominal” data from a liquid oxygen sensor line during a wet dress rehearsal of the mission’s Atlas 5 launch vehicle June 22 at Cape Canaveral, Florida - according to SpaceNews.com.  The mission was originally scheduled to launch July 17, the beginning of its launch period, but has slipped three times. None of the slips have had to do with issues with the Mars 2020 spacecraft itself - NASA announced.  The Mars 2020 project (carrying a rover named Perseverance) will land on Mars on Feb. 18, 2021, regardless of what day it launches during the current launch period. The rover will land in Jezero Crater on Mars for mission designed to last at least one Martian year, or 687 Earth days. Perseverance’s instruments will reportedly look for signs of past life on Mars, but the mission’s biggest purpose is to cache samples of Martian rock for later return to Earth.